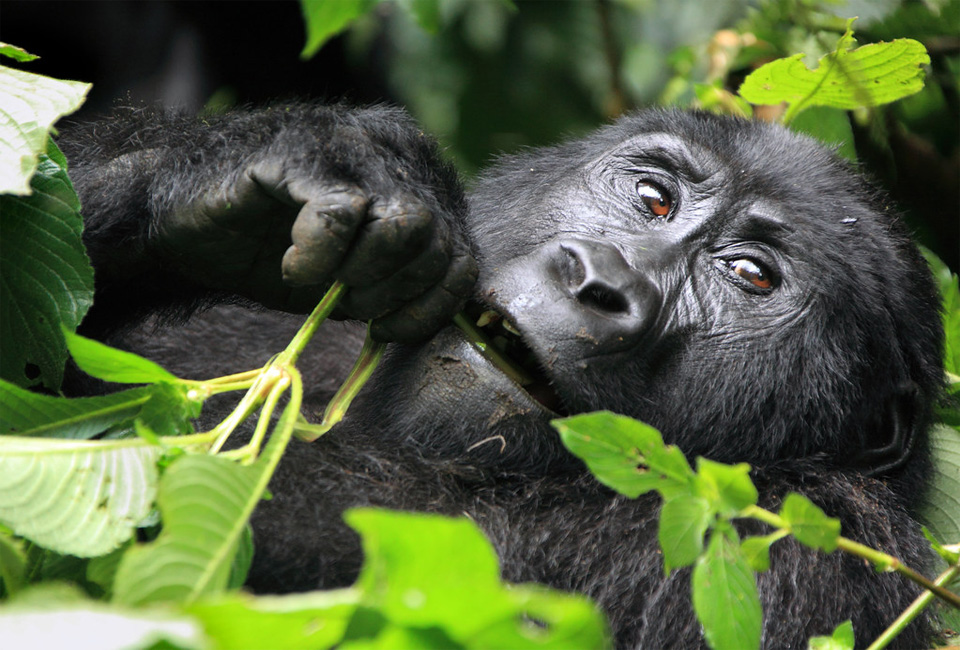 The Mountain Gorilla diets, what do Gorillas Eat and what are the Gorilla subspecies?

Gorillas are the largest living primates on earth, they are majorly found in central and east Africa. They function in a well-developed social structure and often exhibit behavior and emotions similar to that of humans.

Each of the four subspecies of the gorilla has a distinctive dietary characteristic. The different types of diets in the gorilla’s subspecies are attributed to the differences in the type of vegetation found in their respective ranges of habitats.

A Silverback Gorilla is a mature male Mountain Gorilla of East Africa. It weighs between 136 and 195 kg. He is incredibly strong and lean. He has massive canines’ teeth and the female gorillas are about 169.5 kg.

Gorillas move in groups that can range from four individuals to more than 40 individuals. A Silverback leads and holds the position of being a leader and alpha male of the group for years.

What Do Gorillas Eat Meat?

Gorillas mainly stick to a vegetarian diet, feeding on stems, bamboo shoots, and fruits. Western lowland gorillas, however, also have an appetite for termites and ants, and break open termite nests to eat the larvae.

A study in Cameroon by Isra Deblauwe showed that gorillas have a high frequency of insect-eating and a high prey diversity, even higher than those of chimpanzees.

An adult gorilla can consume 18 to 20 kilograms of vegetation and fruit a day.

To be able to process these masses of plant material, gorillas have very strong chewing muscles. Their teeth are much like human teeth, except for the very long, pointed canines of adult gorilla males.

The males do not use those teeth for feeding but for fighting against competing males.

Gorillas do not eat meat.

As the name suggests, mountain gorillas are a subspecies of gorilla that inhabits mountainous regions of East and Central Africa. 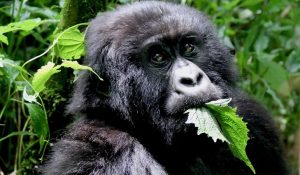 It is estimated that there are 1000 individuals of this subspecies remaining and they are found in Virunga range of extinct volcanic mountains on the borders of the Democratic Republic of Congo (DRC), Rwanda and Uganda, and in the Bwindi Impenetrable National Park in Uganda.

The extensive variety of plants in the mountain gorilla’s diet is the largest variety that has been recorded in any gorilla subspecies.

The mountain Gorillas also eat plant roots and flowers. While the mountain gorilla primarily subsists on a vegetarian diet, the subspecies also occasionally feed on grubs, snails, and ants.

One of the two subspecies which make up the western gorilla species is the cross-river subspecies which get its name from their habitat as they are found in the Cross River’s upstream area.

The subspecies are the rarest in the world with its wild population being comprised of an estimated 250 individuals making it a critically endangered species.

While closely related to the western lowland subspecies, the cross river gorilla has distinctive characteristics including a few morphological characteristics seen in its skull and cranial vaults.

The cross-river subspecies reside in the forests of western Africa usually preferring areas found between 328 feet and 6,683 feet in altitude.

Cross river gorilla feeds on fruits, however, in the months between September and January when fruits are scarce, the gorillas move to a different diet made up of stems, leaves, and tree barks.

However, the subspecies have the most extensive area range of all gorillas which encompasses part of Equatorial Guinea, Gabon, Cameroon, and the Republic of Congo. 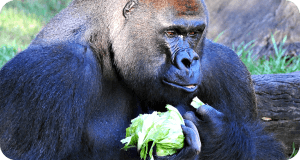 This species is still listed as critically endangered. Western lowland gorillas are exceptional in their ability to make tools from basic materials such as twigs, something that is yet to be observed in other gorilla subspecies in the wild.

Part of this subspecies diet are termites, ants, and other invertebrates which they dig up from holes in the ground.

Like all other gorillas, the western lowland subspecies are primarily herbivorous and mainly feed on fruits.

When fruits become scarce, the gorillas will feed on shoots, tree bark, and roots.

Like all other gorillas, the eastern lowland subspecies are predominantly herbivorous and feed on fruits, stems, and leaves.

This subspecies does not feed on bananas, it only destroys banana plants to feed on the pith. This dietary behavior of the subspecies puts them in constant collision with humans particularly in areas where their natural range overlaps human settlement.

These Gorillas are listed to be critically endangered species. Their diet consists of termites, ants, and vegetation.

Inconclusion, Gorilla is considered to be the largest primate on earth and its diet is made up of a large number of leaves and some of them eat termites, ants, and break open termite nests to eat the larvae.

Taking up a wild gorilla’s eating habits can dramatically improve your health or may even add years to your life. Eating or including vegetables and fruits to your diet can reduce your risk for killer diseases like diabetes, heart attack, stroke, and dementia.

I wouldn’t recommend adding termites, ants and termite larvae to your diet, at least I know I wouldn’t add them to mine.

Take a trip to Uganda and discover more about the Mountain Gorilla diets and habits. At Friendly Gorillas Safaris we will be more than happy to organize your safari. For inquiries please click here.