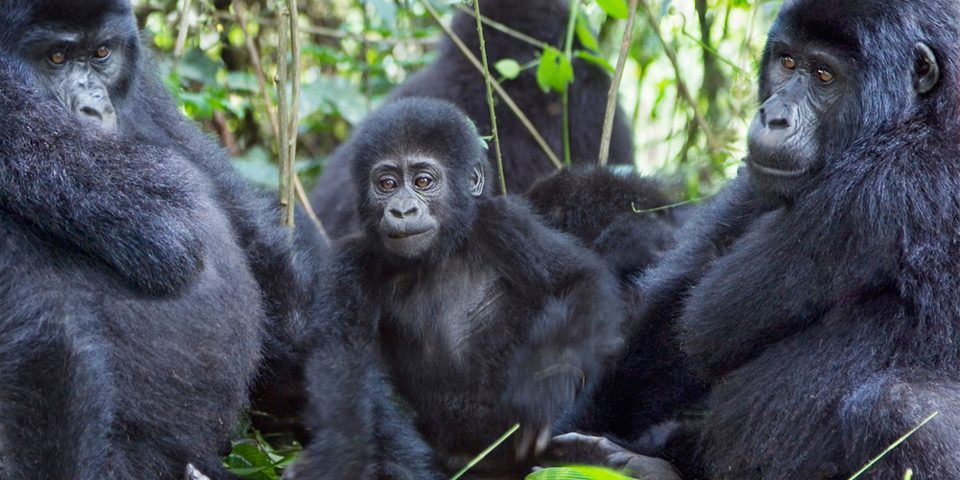 What you need to know for a memorable Uganda primate Safari

Uganda is home to a very big number of different primate species. It is the best place to spot chimpanzees, gorillas, the black-and-white colobus monkeys, red-tailed monkeys, grey-cheeked mangabey, l’Hoest’s and blue monkeys, and olive baboons.

With some historians believing that mankind’s evolution began in East Africa, it is not shocking that Uganda a tourist destination in East Africa is well-known for being a home to various primate species.

Chimpanzees, for instance, are known for being the closest existing relative to man. Uganda is also home to nearly half of the world’s surviving Mountain gorillas.

The most commonly known primate is the mountain gorilla found in the Bwindi Impenetrable National Park as well as Mgahinga National Park. This primate known as the largest primate is Uganda’s biggest attraction.

The Chimpanzees, which are next to Gorillas and are slightly smaller in size and share 98% of humans’ DNA, they are found to be incredibly intelligent with the ability to understand and peak sign language.

Baboons can easily be identified due to their huge size and outstanding canine teeth; they are also easily adaptable and are the most widely spread primates on the African continent.

The black & white colobus monkeys are the most commonly seen in the forest section and in the woodlands near the river.

The mountain gorillas are the number one attraction in Uganda, and there are 14 Gorilla Family Groups open for visitation

It is estimated that there are 1000 individuals of this subspecies remaining and they are found in Virunga range of extinct volcanic mountains on the borders of the Democratic Republic of Congo (DRC), Rwanda and Uganda, and in the Bwindi Impenetrable National Park in Uganda.

The extensive variety of plants in the mountain gorilla’s diet is the largest variety that has been recorded in any gorilla subspecies.

The mountain Gorillas also eat plant roots and flowers. While the mountain gorilla primarily subsists on a vegetarian diet, the subspecies also occasionally feed on grubs, snails, and ants.

They are one of two subspecies of the eastern gorilla. Mountain gorillas are listed as Endangered on the IUCN Red List.

In Uganda, these gorillas can be spotted in Bwindi Impenetrable National Park and Mgahinga Gorilla National Park.

Chimpanzees are the closest primates to humans sharing 98.7% of human DNA. Uganda is home to a sizeable population of these chimpanzees; their number is estimated at about 5,000.

They are considered to be the most exciting primates to see on a Uganda primate safari. Chimpanzees are the most popular primate species among tourists after the Gorillas.

Uganda’s Kibale Forest National Park is one of those few places that have a big number of chimpanzees in Africa.

Not only can you track Chimpanzees in the Kibale Rainforest Jungle, but you can do so at Semliki which is also a rainforest Jungle down the fabulous Albertine Rift Escarpment, Budongo Mahogany Forest at Murchison Falls, Kyambura Gorge at Queen Elizabeth Park.

The Black and White Colobus, colobus guereza, is probably the most common and widespread forest monkey in Uganda, inhabiting most sizeable forests. 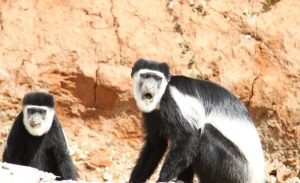 They are locally known as engeye, this primate lacks thumbs. This deformity makes it vulnerable to accidents, especially when making jumps from one tree to another.

The young are born white and they change color after three months.

This beautiful monkey with its black body, white face, whitetail and white sides living in small groups. They can be found in most forests of Uganda, and most National Park.

The Ugandan red colobus is an endangered species of a red colobus monkey, that was recognized as a distinct species.

The Ugandan red colobus has a rust-red cap with a dark grey to blackface, although infants are born with completely black faces.

There is more variation amongst the coat colors of the Ugandan red colobus with back color ranging from black to dark grey through to a reddish-brown.

The sides of the body and the arms and legs are a light grey. They have very long dark to light brown tails which they rely on for balance when climbing and leaping through the canopy.

With males weighing up to 13 kilograms and females up to 9 kilograms, these monkeys will fight to defend their territory against intruders and predators.

In Uganda, you can find the Red Colobus Monkey in Kibale Forest and smaller numbers in Semliki National Park.

The red-tailed monkey, also known as the black-cheeked white-nosed monkey, red-tailed guenon, red-tail monkey, or Schmidt’s guenon is another primate found in Uganda.

It is usually black, red, or orange. It is a distinct creature in its habitats and is gradually becoming endangered.

There are other features characteristic to this mammal as well, such as the white-nose and cheeks in the midst of black or dark grey body fur.

Red-tailed monkeys also have very large, elastic cheeks which are used in gathering food and storing it in their mouths for safety

The Blue Monkey also referred to as the Cercopithecus mitis belong to the Old-world monkey ancestry. It lives in the sections of East and Central Africa.

Blue monkeys are Dark-Blue-Grey in color, white throat, and a white patch on the chest.  You can find these monkeys in all of Uganda’s parks with the exception of Murchison Falls National Park and Lake Mburo National Park.

Blue Monkeys live in troops of four to twelve animals.  There are 20 kinds of guenon monkeys, three of them found in Uganda.

Scientifically, golden monkeys are known as Cercopithecus kandti and are differentiated from other species by their 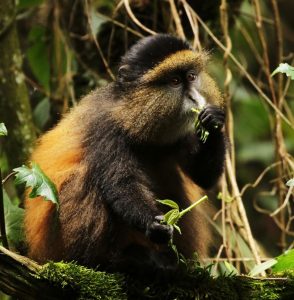 golden-orange patches on their backs and flanks.

Golden monkeys are confined to the mountainous forest, they can live in groups of up to 60 individuals and their diet mainly comprises of young bamboo branches, leaves, shoots, and other plant leaves, fruits and some insects.

Like Chimpanzees and mountain gorillas, the golden monkeys have been habituated. This means that they are used to humans and will go about with their daily lives while you are there.

These monkeys can be found in Uganda’s Mgahinga Gorilla National Park. Golden monkeys prefer to move and sleep high in the bamboo forests

They have specialized cheek pouches enabling them to quickly fill up their mouths as they forage for food. Mangabeys communicate by slapping their lips together while shaking their heads.

These monkeys are greyish and black.  They live in low and moderate altitude rainforests.  They act in a baboon-like manner.

This species is significantly smaller than the grey-cheeked mangabey, with a shorter skull and smaller face Uganda Mangabey Monkeys are now being habituated and are ready for visitation. 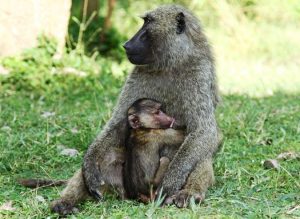 The olive baboon, also called the Anubis baboon, is a member of the family Cercopithecidae (Old World monkeys).

Olive baboons have a greenish-grey coat covering their bodies. The individual hairs are green-grey with rings of black and yellowish-brown, giving the coat a multi-color appearance from up-close.

They live in savannahs, steppes, and forests. They usually live in large troops and their dog-like heads make them look fierce and they love to show their menacing teeth.

The skin on their faces, ears, and ischial callosities is dark grey to black and covered with a very fine fur and they have a salt and pepper wreath of fur around their faces.

Olive baboons have long, pointed muzzles rather than the flat faces characteristic of other primates, including humans.

They are locally known as enkobe, and they are probably Africa’s most destructive animals to human crops.

In Uganda, you can find them in all Parks with the exception of the three Montane region parks such as Mgahinga Gorilla Park, Rwenzori Mountains, and Mount Elgon.

The patas monkey, also known as the wadi monkey, is a ground-dwelling monkey found in over semi-arid areas of West Africa, and into East Africa.

It is a terrestrial monkey found in the savannah parks of northern Uganda such as Murchison Falls Park and Kidepo Valley Park.

Patas monkeys live in big groups of up to 60 individuals. The group contains just one adult male for most of the year. They can live in the wild for as many as 20 years.

The L’hoest monkey mostly lives in mountainous forest areas in small, female-dominated groups. It has a short, dark brown coat, with a chestnut color across the back and a dark belly.

These monkeys are very attractive guenon and not too often seen since it loves to hide in the dense forest and is terrestrial.

Its cheeks are light gray with a pale mustache. It has a characteristic and prominent white bib. The male weighs about 6 kg, while the smaller female weighs 3.5 kg. Its tail is long and hook-shaped at the end.

As you can certainly see from the information I have provided, Uganda is a nation endowed with various Primates which significantly differ.

The International Primatological Societ, as well as UWA (Uganda Wildlife Authority),  have put so much effort into preserving the primates in the various game parks and forest reserves to ensure that these primates continue to survive.

It is very exciting to get to see these amazing primates up close, and we at Friendly Gorillas Safaris would like to organize a primate safari for you. Please get back to us in case of any inquiries. 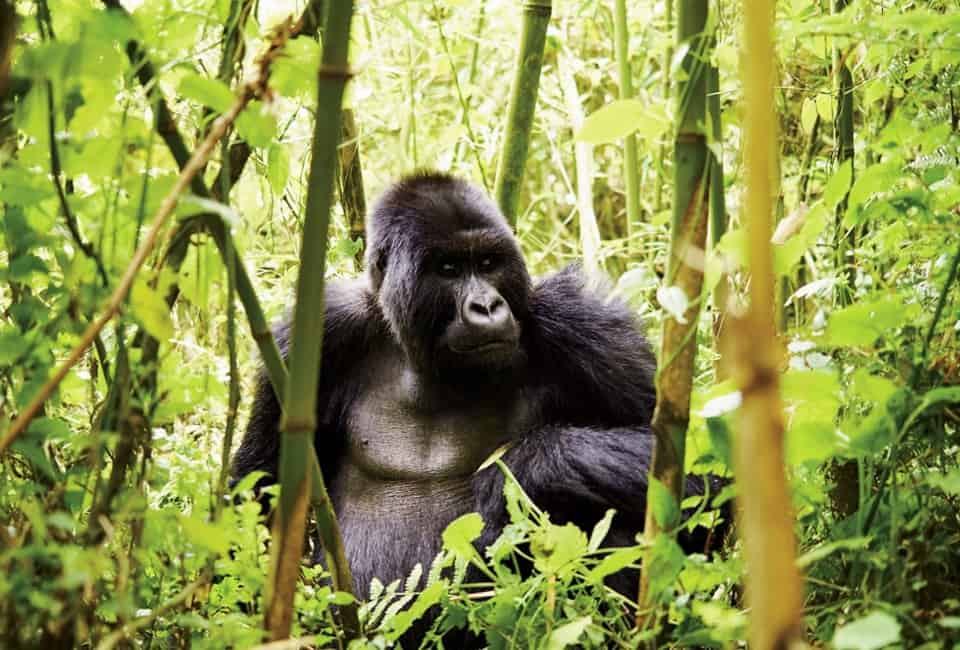 Hot facts you must know about Mountain Gorillas – Uganda Safaris